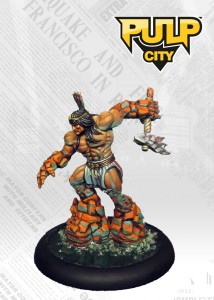 Stone Hawk has gone from hedonistic slacker and small time hoodlum, to Supreme Hero on the streets of Pulp City. For the past few years Stone Hawk has walked a path of redemption and atonement as he tries to live up to the mantle he bears.

As a Tank he is able to protect allies through his Role Power, and his 40mm base size provides a bonus die against smaller based models. Stone Hawk has only one Attack, his Tomahawk which can inflict Damage 2 as basic effect in close combat (with EFX as Damage 1 or Stun), making him a credible threat. His second Action (Rock-Hard) allows him to add a die to rolls as defender (stacking with his Tank Power, and Size Matters where it applies). Between the two, Stone Hawk has a nice mix of offensive and defensive options, which can be used in the same Activation as Rock-Hard is combinable. Those Actions are coupled with his Powers, which allows him to move to Friendly models within 2 inches to then use his Tank Power (Redemption), and his Immunities to Displacement Effects and Dangerous Terrain. 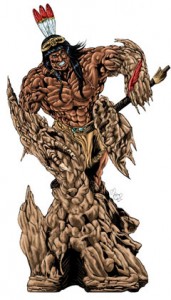 More  than those Actions and Powers though, Stone Hawk can control the battlefield through his Stoneshapes Power, blocking LOS and depending on what movement type models have, lanes of movement too, which is ideal in Agenda based games. These pieces of Summoned Terrain appear as multiple Structures (fading away in the following Effects Phase), and with HP 5 are comparably resilient to a Level 1 Blaster or Brawler. At 5 inches high, models that use Sprint movement cannot go over them. They also provide reinforced cover to models behind them.

As a Tank, assume Stone Hawk will take Damage, especially due to his Redemption Power. Therefore pairing him up with a Support able to Heal is a great combo with mutual synergy, ensuring a steady supply of AP while Stone Hawk keeps the fragile Support Supreme in the game. Blood Rose is a perfect model to match to Stone Hawk in this regard. Dead Eye and Dark Solar are both excellent Leaders for Stone Hawk to work with, and able to include him in their respective Teams without compromising prerequisites for their specific Faction Leader Cards.

Stone Hawk can be found here in the Pulp Monsters web-store if you want to include this tough Supreme in your Team.

If you want to read more about Stone Hawk’s background his story can be found here.