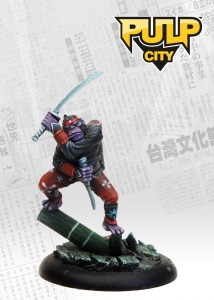 More than any member of the A.R.C. Chimp Chi has evolved. Once quiet, shy, and bullied, Chimp Chi was driven out of the A.R.C. to follow a quest. For years his mission to find Red Bella led him to the heights of snowy mountains, the depth of the Green Emperor’s realm, and finally to a full understanding of himself. With Red Bella back in Pulp City Chimp Chi is now working to end the reign of the Green Emperor and restore balance to the city.

Chimp Chi is a Level 1 Infiltrator who works with A.R.C. or The Way. He is very much a ninja and if you play him as one he can be incredibly effective. His basic Actions are Lunge and Shuriken; each costing only 1 AP. Lunge is a basic Close Combat Action dealing Damage 1. Shuriken is a Projectile with 4 inch range, inflicting Fatigue as basic Effect (FX)  with Damage as the Extra Effect (EFX). Shuriken is great to slow down dangerous targets like Powerhouses or Brawlers, but also against Minions as it reduces an entire card’s ability to Activate. 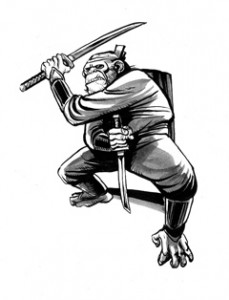 Chimp Chi’s deadliest Action is Ape Ki. Ape Ki costs 2 AP and Stuns Chimp Chi, making him an Easy Target, but inflicts Damage 2 as FX and EFX meaning that with a sizeable dice pool it has high potential Damage output. For best use pick a wounded or isolated target who won’t be able to retaliate. Use Chimp Chi’s Wall Crawling to drop onto your target dealing Crash Damage and Stun them to add another die. Doing this will also let you use Chimp Chi’s Sneak Git power granting him an extra die when he benefits from Momentum. Prepare by getting a few Power Up dice on him prior to attacking.

Red Bella and Chimp Chi work very well together, and both are A.R.C. and The Way Faction members. Bella’s Idol points can each add +2 dice to an Ape Ki attack. Bella can also use her Whip Action to position a model for Chimp Chi. Primate of Mystery can increase all of Chimp Chi’s Traits by +2 giving him a Trump Agility of 7, more than capable of dealing Damage to any model in the game. Tanuki is a great Support model who can add many Power Up dice to Chimp Chi, or give Chimp Chi Agility of 8; which could be further boosted by Primate of Mystery to Agility 10! Finally, White Tiger as Leader of The Way gives a lot of bonuses to models in BtB to further increasing Chimp Chi’s Damage output.

If you would like to add Chimp Chi to your Team (A.R.C., The Way, Heroes or Villains), then he is available here in the web-store (click for link).