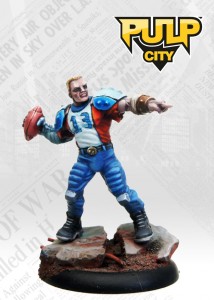 A former star athlete who famously fell from grace, Dead Eye has become the figurehead for many vigilante Supremes in Pulp City. Those that follow him tend to be the outsiders, not regularly associated with any of the known Hero Teams. And even though some critics argue that Dead Eye operates outside of the law, all recognize that time and again he has resolutely defended the city he still loves.

A Level 3 Hero Leader, Dead Eye has high Strength and an outstanding melee Action to go with it: Power Smash. This allows him to use the Smash It Up bonus and hit people with cars etc. for an extra die. The basic Effect (FX) for Power Smash is an impressive Damage 2, while the Extra Effects (EFX) are Damage 1 or Knockback 4. Dead Eye Pass is a 3 AP Ray Action with range of 6 inches, allowing him to hit multiple models at once, with FX of Damage 1 and Stun, and EFX Damage 2! Finally, Walk It Off is a Projectile with range 12 inches which allows Dead Eye to remove Stun and Suppress from Friendly models, a useful counter-measure especially against Necroplane and Coven who often use Suppress.

Perhaps his biggest strength is his Tactics Power, allowing another Friendly model to Activate directly after Dead Eye’s first Activation each Round – an incredibly potent tool for setting up combos. His next Power, Local Patriot, provides Dead Eye and one Friendly Supreme Power Up 1 once each Round. Finally, My City handily renders Dead Eye Immune to Displacement Effects and Stun.

Like other Leaders, Dead Eye has access to 3 Leader cards in a game, which means his play-style can be tailored to suit your own, focusing on offense or playing a more strategic focus. On top of this, his Faction Leader Card (see right) gives bonuses to any Friendly model attacking models of higher Level, excellent when fielding a number of Level 1 Supremes, or to help counter an enemy Powerhouse. To make use of the card, all Supremes in Dead Eye’s Team must lack a Faction, making Honorary Member a useful workaround to include Faction-affiliated Supremes lacking Freelancer. 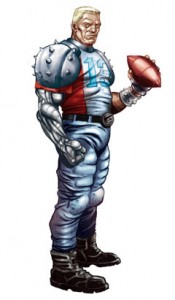 Dead Eye works very well with Trail, as together they can create a three-Supreme Chain Activation. Two good alternative Support choices for AP generation are Riposte and Tekkna. Bigfoot is a useful heavy-hitting Infiltrator who can flank forward and still be defended from Stun and Suppress through Walk It Off. Sovereign, Perun and Solar are good all-rounders in combat, with a mix of ranged and melee Attacks to offer. Gentleman offers cheap (Level 1) long-range threat without the need for special protection due to his Flash Grenade Power. If you expect to face a lot of Minions, Foxxy Blade is an ideal option, again at low Level. Finally, add in Vigilantes (Minions) for improved threat and board control (they benefit from extra dice against Enemies when in Dead Eye’s Team).

You can read more about Dead Eye’s fall and rise here (click for link).

If you want Dead Eye to lead your Team, you can find him in the web-store here (click for link).