Some beings are born to lead. The problem for the Ape Revolution Committee is that they have a few too many alpha-primates in their ranks.

When Channel 4 mentions the bravado of A.R.C., Guerilla is usually the one mentioned most. However, only a few outsiders to the A.R.C. are aware that most of the progress made by the primate Supremes in the last few years was sparked by the twisted mind of their alpha orang-utan; the self-proclaimed Dr. Red. Although his first attempt to take over the group while still in the space ended up with Guerilla beating him to a bloody pulp, Red has since plotted his ultimate rise to power, mastering the art of patience. 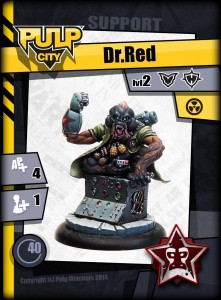 There are two things that the Red Alpha loves in life. Firstly, is when his actions affect the world indirectly; he considers the act of pulling the strings to orchestrate events to be far beyond the simple reasoning, understanding and appreciation of most of his comrades, especially including Guerilla.

The second thing that Dr. Red loves is watching things blow up; and to do so, again and again. Red still remembers the first time he admired Pulp City’s massive 4th of July celebrations, only to quickly decide that it was all a pointless display of misplaced power. He likes the pretty sight of fireworks, but even more he hates the aspect of pointless symbolism that he perceives in celebrations when there is war to be fought. When Dr. Red blows things up, it is always spectacular to behold and with purpose, at least to his own cause. 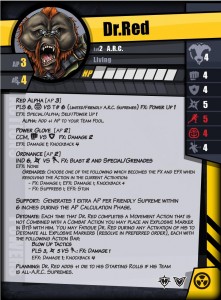 Red has learned a lot about explosives but rarely follows the safety instructions of the U.S. Army ordnance which A.R.C. steals and trades for with shadowy parts of Pulp City’s underworld. When he drags his giant body across the battlefield, explosive charges literally fall out of his pockets. When he throws his custom-made grenades, he never quite knows what result will be. Usually the outcome is at least as good as expected, even if his comrades are sometimes in his firing line, subject tor unexpected friendly fire.

Beneath a mask of a crazed and random primate, there is a very apt brain that constantly plans, constructing strategies to pay off in Red’s favor when the time is right. 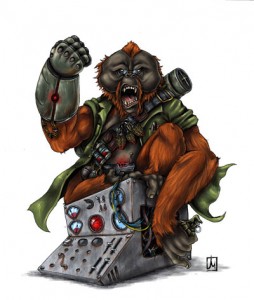 While not many of his comrades will directly agree with the statement, most of them would consider Red Alpha their foremost mentor and tactician. The simian brethren of A.R.C. calculate that with each passing year they will see more and more incursion into the human supremacy, based on the indirect approach to things championed by Dr. Red. And while Guerilla still triumphs in most of the missions he undertakes, when he crashes, he crashes hard. Over the last couple of months this has happened increasingly, usually when facing smarter rivals like C.O.R.E. or Dr. Tenebrous, and the various new Supremes that have been emerging since the Fall.

If it ever came to a day where the team would have to split because of different visions of the revolution, the A.R.C. will stand divided, and Dr. Red will aim to stand above all.

<< Back to Heroes and Villains