Stygian, the leader of the awakened ancient dark gods known as the Forgotten, describes Hellsmith with one word: inhuman. From the mouth of a being who plots with and against the Lords of Necroplane and has killed and vanquished thousands, ‘inhuman’ is almost a compliment.

Hellsmith was a minor deity of forges in the Greek pantheon, his true name long lost in the sands of time. Asleep for aeons, gods sometimes wake up when their name once again evokes strong emotions, leaps of faith, fear, anger or lust. Hellsmith’s tale is that of the forge guardian who lived in the shadow of Hephaestus, the master weapon-smith.

The brilliant weapons crafted by Hellsmith were always credited to the Hephaestus, and so Hellsmith’s frustration grew. At the time when mortals fought for Troy, messengers of Hades offered Hellsmith a chance to betray his master and become the chief armorer of Hell. The plot was uncovered by Zeus when Hellsmith betrayed himself with his drunken boasting, and punishment was enacted immediately.

Struck down by a bolt of lightning and cast into the oily depths of the river Styx, the lifeless body of Hellsmith floated for many, many centuries until one of his most magnificent creations, the Hell Hammer, ended up as a center piece in a Pulp City Museum exhibition. The crowds were enchanted by the dark beauty and the surge of emotions it stirred up within those gazing upon it woke up the would-be armorer of Hell. The smith clawed his way from darkness to the very streets of the city. Now, recovering his power in Pulp City, Hellsmith is a vital tool in the hands of Stygian, who has gathered an army of no longer remembered gods. 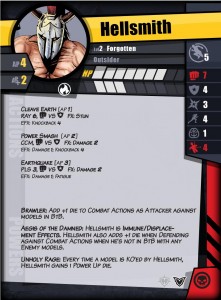 There is not much wit or intelligence within Hellsmith. He makes up for such deficiencies with commitment and persistence. He doesn’t have many sworn enemies since being ‘an enemy of Hellsmith’ is often a temporary state, lasting only until he hunts them down. Cold eyes stare from the depths of the horned Spartan helmet, often transfixing victims until the moment when reality comes crashing down with a crushing blow of the Hell Hammer.

<< Back to Heroes and Villains