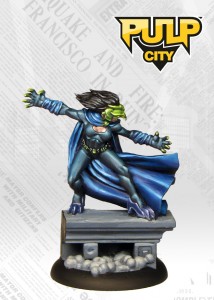 A brutal vigilante tormenting her targets from the shadows, the merest mention of Jade Hawk’s name strikes fear into goons across Pulp City. Despite her violent reputation, she has a number of allies both among the vigilante community and in the ranks of The Way. Determined and uncompromising, it is rumored that Jade Hawk is now stepping up her actions as she targets one of the city’s biggest crime-bosses.

In many ways, Jade Hawk is the archetypal Level 1 Infiltrator, with low HP, Stealth and Wall Crawling. Her two Attacks allow either Damage 1 (Strike) or Damage 2 (Death Claw) as basic Effect. Death Claw offers a nice array of EFX choices (Damage 1, Fatigue, Stun and Follow Up) giving excellent variety, which largely makes it her core Attack. Despite Death Claw being front-loaded with FX of Damage 2, her overall total Damage output from the Attack is limited by her die pool, so she is best used against lower HP targets with low to moderate Defense Trait, or as a set-up for allies if she can achieve EFX to apply Fatigue and/or Stun. The two Attacks are complemented by a Reaction to being Targeted – Wing Sweep. For 1 AP this offers 2 extra dice against the triggering Action, which if Jade Hawk is used effectively should stack with the base die and another die from High Ground if she is benefiting from her Wall Crawling movement type while in contact with terrain. 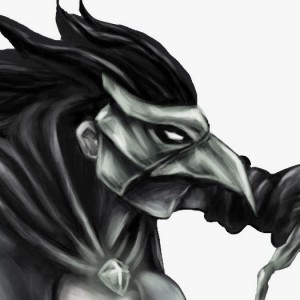 Through her Urban Predator Power, if Jade Hawk has no Friendly models within 6 inches (except Skyline – her frequent partner), then her Attacks benefit from Strong/All (basically +die to attacks). To get the best out of Jade Hawk, she needs to hug terrain (to benefit from High Ground) and time her Attacks to gain Momentum where possible – offering a potential 4 dice which can be a nasty surprise for opponents. Where Jade Hawk comes unstuck is against hard-hitting models that attack close up. With 4 HP she can be fragile despite her Stealth and Wall Crawling, so needs to be used carefully, and pick her targets wisely.

Jade Hawk is a member of the Way; consequently she benefits from White Tiger’s bonus die to Friendly model’s Attacks, stacking with Jade Hawk’s other potential bonuses. She is also a Freelancer, meaning she works well with Dead Eye as she qualifies for his Leader Card prerequisites. Her most natural ally is Skyline as he does not negate the Urban Predator bonus, and is also an Infiltrator.

To add some brutal justice to your Team, you can buy Jade Hawk here.